We are living through the biggest economic shock of our lifetimes and one of the most pivotal moments in human history.

The rules of the game are to stay solvent and secure your Bitcoin in cold storage. 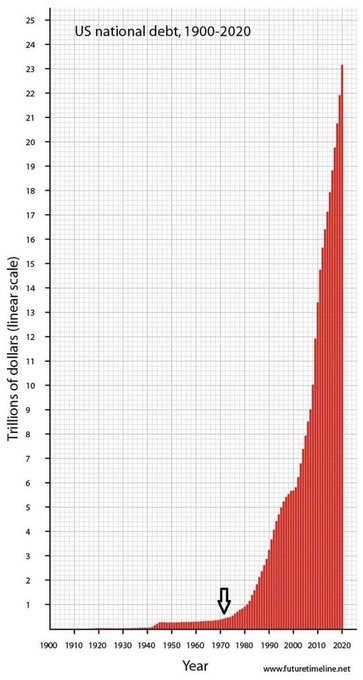 Everything is breaking. Years of 0% interest rates encouraged everyone to take on cheap debt. Corporations, countries, individuals… Everyone. Most of the debt wasn’t used productively – meaning most of it will never be paid off. And now that interest rates are rising…

Our current economic system REQUIRES more debt to survive. Just take a look at this graph and you’ll see that the amount of debt only goes one direction. If we don’t pile on more debt, the entire thing collapses – and that’s what we’re flirting with now: Systemic collapse.

The amount of new debt required to keep things propped up is at truly silly levels. And the Fed is making one last attempt to deny reality by raising rates… But the only way to stop our momentum is to slam into a brick wall of economic pain – which is exactly what’s happening.

We’re seeing the chaos play out in all markets: – Equities are tanking – Bond yields are surging – Currencies are plummeting vs. USD – Bitcoin selling off – Shitcoins evaporating There are very few places to hide. And cash is being eaten by inflation of 8%+.

Here are some charts that illustrate how crazy things are getting: 1. German 10 year yields just broke through a 4 decade long trend line. The German economy is being crushed by inflation, but the EU can’t raise rates without bankrupting Italy and Greece. The EU is trapped. 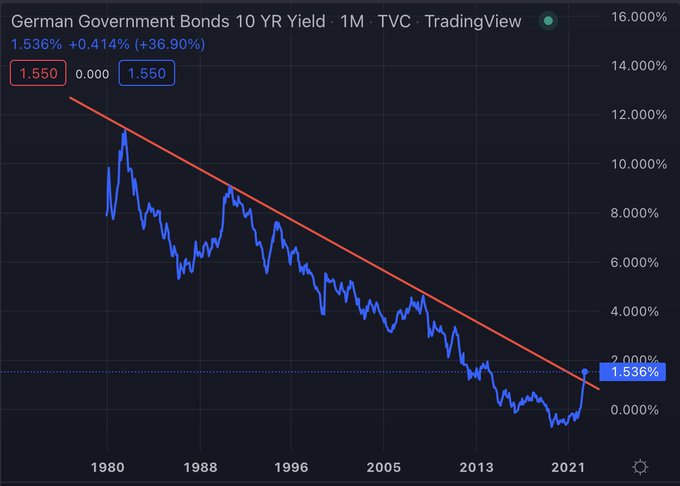 2. The Japanese Yen, the 3rd largest currency in the world, is being destroyed by its central bank. The Bank of Japan is buying UNLIMITED quantities of Japanese Government Bonds to prevent yields from going above .25% Why? Above .25% and the Japanese banking system implodes. 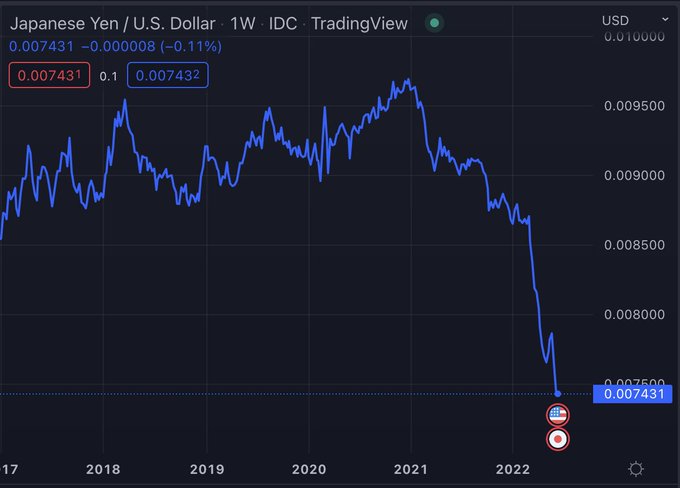 Watching the Bank of Japan destroy the Yen offers a glimpse into the future of other major fiat currencies, including the USD. When the debt becomes too large, yield curve control and destruction of the currency becomes one of the only ways out.

3. Dollar weakness vs. the Russian Ruble. Russia is done accepting cheap fiat for scarce goods. This severely limits the ability of Central Banks to kick the can by printing. Russia is calling the fiat bluff – and the implications are massive.

4. Corporate bonds are falling off a cliff as investors realize that a lot of companies won’t be able to pay off their debt at higher interest rates. Companies that can’t afford to refinance will need to layoff employees and liquidate assets which is bad news for everyone. 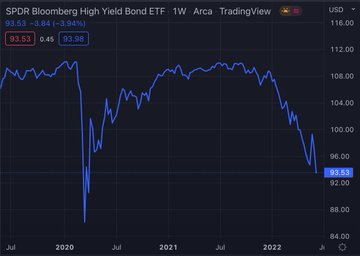 5. Let’s take a quick peek at how mortgage backed securities are holding up through all of this… YIKES. Fun Fact: The Fed says they’re going to sell some of the MBS that they bought during QE. Good luck. 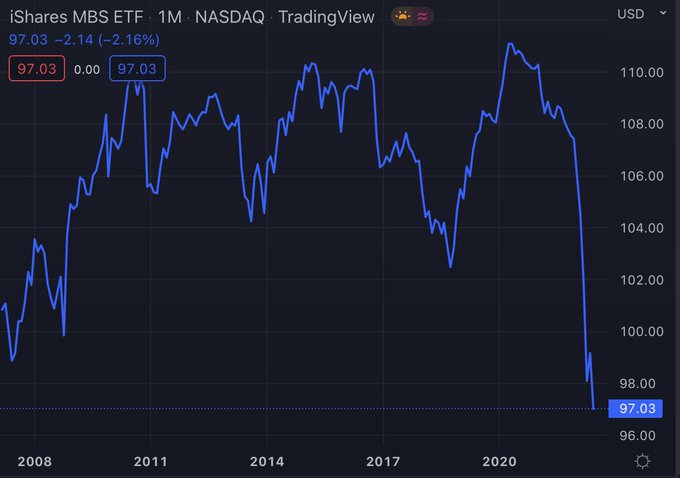 By now you get the point: The entire system is crumbling. Cracks are opening up and portfolios are tumbling to hell. And yet… What can the Fed do? With inflation absolutely crushing people, can they really reverse course and fire up the money printers again?

Inflation in the real world (with pressure applied by Russia) means we’re now facing an impossible policy choice: Mass default leading to systemic collapse, or continuing down the path towards hyperinflation.

And this finally brings me to Bitcoin and why I’m calmly stacking through the chaos. Let’s be frank: The Bitcoin price is melting down. It’s testing the low $20K range as Celcius blows up and shitcoins head to zero. But the value prop of Bitcoin remains exactly the same.

Everything that is playing out right now is why we’ve been stacking Bitcoin to begin with. The fiat system is falling apart. And we need a form of money that can be held safely outside of the system without counter-party risk.

Risk is everywhere right now. And as an investor, you need to decide which risks you want to take on.

Let’s look at your options:

2. 60/40 Equities + bonds. This is one of the worse years on record for this allocation. Businesses are facing a recession and governments need to monetize debt. It may be less volatile than BTC, but it’s looking like a big loser long term.

3. Gold. I actually like gold. Its lack of volatility and ability to self-custody makes it nice to hold when things are melting down. But we’ve seen that Gold barely keeps up with the money printing. And unless the Fed decides to let everything collapse, money printing is ahead.

4. Individual stocks / energy / commodities. This is a popular trade right now. Buy things that will definitely be needed. It makes sense, but you better be a great trader to do this successfully. Personally I don’t want to have to try to time these notoriously volatile assets.

5. Bitcoin. Yes it’s getting crushed in the short term. But if you have a strong balance sheet and a long time horizon, that shouldn’t impact you. This is an asset that’s outside the monetary system like gold – but reacts much more favorably to the money printer.

If you have cold-stored Bitcoin, you have zero stress about your Bitcoin disappearing, or your balance being bailed in by an insolvent entity. And if you believe the Fed will try to save the system, then the only way that can happen is via further destruction of the USD.

So you have to ask yourself what you value more: Are you trying to be well positioned for the long-run? Or do you prefer to avoid volatility over the next 6-12 months at the expense of getting crushed long-term? I like thinking long-term. So holding Bitcoin makes sense to me.

If you’re holding BTC too, your two most important goals should be: 1. Remain solvent. Keep enough cash to cover expenses even if you lose your job for a while. Job losses happen at times like these and you don’t want to sell at the lows. 2. Keep your Sats in cold storage.

Mindset is important. Keep your eye on the big picture. Realize that everything is breaking down and that naturally the Bitcoin price reflects market volatility. It’s all really happening. Fiat endgame. If you stacked, you’re well positioned. Stay solvent and hold your nerve.